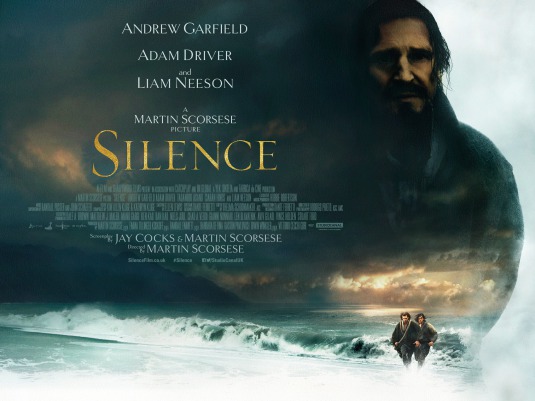 To quote The Dark Knight: “You either die a hero or you live long enough to see yourself become the villain.” Silence shows both sides of this statement.

People who are familiar with the movies from Martin Scorsese are familiar with his themes on guilt, redemption, pride, morality. And usually these themes are portrayed in a gritty, dramatic, and even tragic light. There’s a controversy surrounding Silence because many people, including Bishop Robert Barron, mistakenly believe that the movie promotes apostasy. They forget that the story is historical fiction and that the story arc of Fr. Sebastian Rodrigues isn’t a heroic journey, but a tragedy.

I think people forget what a real tragedy is supposed to do. Many people love watching shows like House of Cards, How to Get Away with Murder, and Suits which all have villainous protagonists and the show essentially sides with them even as they endure lots of drama. The protagonists of these shows are not to be admired or imitated or even mourned over if they ever lose the power they gain.

A real tragedy, however, can be found in plays such as Hamlet or Macbeth and even in characters such as Iron Man, who lost his friends and loved ones due to his own hubris and paranoia. The character of Sebastiao Rodrigues is an authentic example of a tragic hero. We aren’t meant to imitate him, but mourn him and learn a lesson from his bad judgment.

In traditional tragedies, the central character has a tragic flaw. Macbeth’s is ambition, Othello’s is jealousy. Sebastiao Rodrigues’s flaw in the movie is implied to be vanity. There’s a moment in the movie where Fr. Rodrigues sees his reflection in the water and sees Jesus’s face as his own. His old mentor, Fr. Ferreira, berates him for daring to compare himself to Christ. Now while having a God complex is never a good thing, I think that Fr. Rodrigues was just trying to act in persona Christi. He had such a devotion to the Holy Face of Jesus that touched my heart.

I think Rodrigues’s real tragic flaw was an interior struggle with a spiritual darkness. This darkness only grew as he watched the defenseless villagers offer themselves up to protect him, to the point that many of them are tortured and eventually die for their beliefs.

When I looked up the era that the novel took place in, I learned that at the time, there weren’t many saints or texts outside of the Psalms that talked about spiritual darkness. It’s possible that Rodrigues didn’t know how to deal with the darkness because he never learned of anyone else who dealt with it. I’m also surprised that Psalm 88 isn’t mentioned, as I think that the Psalm captures Rodrigues’s interior struggle.

In his video review of Silence, Bishop Robert Barron compares the apostate priests to soldiers who defect to the enemy. I think what Bishop Barron forgot, however, is that many soldiers in real life suffer from PTSD. I think that the psychological torture Rodrigues was put under led to him developing a spiritual PTSD. He let himself be consumed by the darkness and apostatized out of a distorted attempt at heroism.

Rodrigues and Ferreira suffered a fate worse than death as a result of their apostasy: they became what they hated the most and make sure Christianity is not brought into Japan anymore. They are mocked by the children and are ordered to take on a new name. They also take a wife, but it’s never shown if they have any relations with the women they ended up marrying.

It’s shown that even after he apostatized, Rodrigues is still put under great scrutiny. He never completely wins over the trust of the Japanese overlords. In the end, Rodrigues’s entire identity as a Christian completely eradicated as he is given a Buddhist funeral and buried under the name that the Japanese overlords gave him. The only evidence of the man he once was is the crucifix that is shown in his hands as his body is burned.

I don’t think that these events glamorize or promote apostasy. Rather, they show the consequences of sin, in this case, the apostasy: separation from God and loss of self. The film shows the brutality of martyrdom, but giving into spiritual darkness is equally tragic.

I highly recommend Silence to those who want to see a good example of a modern tragedy and I think it’s even a good film to watch for Lent because of its look into spiritual darkness. Just bring tissues and ice cream. You’re going to need it.

Saint Mother Teresa of Calcutta, pray for those who apostatize and struggle with spiritual darkness.

Image is used for editorial purposes only.